Compared to Pokemon, I played a lot of the Yu-Gi-Oh! card game. As I got older (6th grade?) I was actually gifted booster boxes, though by that time I was pretty much always playing by myself. I played a lot of the games (starting with Forbidden Memories…) and even got in to online competitive play for a brief time in college, just before the mechanics of the game became absurdly complicated. I give a lot of credit to the team behind Dueling Network, which shut down right around the time that I graduated from college.

When it comes to valuing cards and getting them graded, I understood the utility of certain cards quite well. At least, compared to Pokemon cards. I was probably 26 years old when I learned that the Base Set Blastoise saw more competitive play than Base Set Charizard. I spent probably a decade knowing that Rageki and Pot of Greed spent time on the banned list because they were overpowered. I also knew which YGO cards were featured most prominently in the anime, I knew which ones sold for the most at the card shops I used to frequent. For good measure, though, I did use Big AR to determine sales history and pricing.

Much to my disappointment, every valuable card I owned was a promo or limited edition card. I only sent 10 cards away to be graded. None of my great childhood pack pulls were among them.

See the card stacks in the photo above according to the Yu-Gi-Oh! rarity reference. These were comprised of:

While disappointing compared to some of the Pokemon prices, it wasn’t like I ever viewed these cards as an investment. Many of them saw significant play time (though we rarely followed the rulebook as kids). Even as I began cataloguing the cards, I found myself deconstructing almost 20 functional decks that I had lovingly assembled over the years.

The Cards I Sent to be Graded

I sent nine cards to be graded. They were:

Out of thousands of cards, this was a disappointing set. What makes them desirable also is what makes them boring. I don’t have any happy hit-the-lottery memories of pulling these cards from packs. The one Dark Magician Girl was the face of a tin–no surprise there. The RDS Special Edition one was a 1/4 draw Ultra Rare from a Rise of Destiny box with 3 packs and a special card.

The Stairway to Destined GBA game had three cards: Valkyrion, Harpie’s Feather Duster, and Sinister Serpent. I’m quite sure that I logged a significant amount of time playing this game. Buying the game new provided three desirable cards that had been featured in the anime. I either traded my Sinister Serpent, or it was in poor condition, so I sent Harpie’s, one of the most legendary spell cards, and Valkyrion.

I also had a copy of Thousand Knives. I never placed this PC video game, so I must have traded for this card. Unlike Harpie’s Feather Duster, which was, again, terrifying, this was a card with limited uses which probably contributed to it being in such good condition.

The remaining 5 cards were from Shonen Jump magazine. I remember this being promoted pretty heavily in the United States, specifically on Cartoon Network. Plenty of kids like me begged their parents to subscribe to the magazine in order to receive the promo cards. In retrospect, this was genius. I will never forget that the first edition I received included a card that was already bent in half. Though I quickly lost interest in Yu-Gi-Oh! after first subscribing, I did amass a collection of some desirable cards. Since these all had to go through the mail, and had that temporary glue on the back, finding these cards in prime condition is rare. Incredibly, I received this last card, the 18th Shonen Jump promo, at some point in 2008, after I had already started high school.

How Did My Cards Get Graded?

Since I sent roughly 60 Pokemon cards to get graded and most of the results were uninspiring, I didn’t want to take the time to include them all in a blog post. I only sent 9 Yu-Gi-Oh! cards. I think I can manage to fit them into a blog post.

I sent my cards bulk through Ludkins. I paid roughly $15 per card and it took 8 months to receive all of my cards back.

This is a common, yet beloved, card. The graded population is 358. The population of PSA 6s is 23. The last 6 to change hands sold for $47 back in August. PSA 10s sell for roughly $450. This is an iconic card, and definitely the most recognizable of any I sent to PSA. I actually played with this card quite often in my Dark Magician themed decks, so I’m shocked it received this high of a grade.

For whatever reason, this card saw less play than my other one. Dark Magician Girl is sought after because it’s considered a “sexy” card from the anime. This is one of the few Yu-Gi-Oh! cards that has spawned recognizable Halloween costumes. There are only 206 of these cards graded and 83 have been PSA 9 of 10. This is usually the most common result, as people will easily justify taking the risk of sending in PSA 9s in the hopes that they are graded as 10s. The last PSA 9 sold 3 months ago for $266. Now we’re talking.

This is, in all likelihood, the last YGO card I ever obtained. Whatever I did to preserve it was wortwhile, since this received a respectable PSA 9. Judging by this table, most of the late-stage Shonen Jump cards are extremely hard to come by. They are rare to the point that I don’t think the market is liquid enough to accurately represent their value. There are only 10 copies of this card that have been graded, and 5 of them are PSA 9. The last PSA 9 card, sold almost a year ago, went for $67. I think this is extremely low.

This card is a classic due to its featuring of so many characters from the first iteration of the anime. It’s also a powerful card to play in defensive decks. There were only 55 of this card graded with 3 6s. There isn’t anything special about a 6/10. Shockingly, one of these (not mine) traded a few months ago for the paltry sum of $28.

This is a card bearing great significance. Yu-Jo Friendship incurs an action that transcends typical gameplay. It involves offering your opponent a handshake. This was the first card to require physical interaction. Some of the stories surrounding this being used in competitive play are absolutely hilarious. This card is banned in remote duels. The last documented sale of a PSA 9 was about $125 roughly two years ago. It is likely that the actual value of this card is roughly double that value.

Judgment of the Pharaoh – PSA 7

For all I know, these three cards were probably released in the same issue. This one has the most limited sale history. I’d estimate the value somewhere around $20.

Only 15 copies of this card have been graded. This was an extremely rare card and also one that was popularized early in the GX era (I was still watching the show at that time). Unfortunately, I put this guy through way too much playing, and it received a 4. Loose, this card only sells for between $10 and $30. It was likely not worth getting graded.

174 copies of this card have been graded. It’s not a particularly useful card for competitive play, though it did make a triumphant appearance in the anime.

Loose, the prices for this card are all over the place. This underscores how much less desirable YGO cards are compared to Pokemon cards. Something about the art styles leave a lot to be desired, where Pokemon, to me, seems more timeless. Anyway, I’ll state the value here at $20. Also not really worth having graded.

This is such a dominant go-f#$%-yourself card that I’m surprised I didn’t obliterate it through extensive play. It’s pretty similar to Valkyrion in that there are 190 slabbed cards. This card is very recognizable and loose it can sell for tens of dollars. I’ve seen PSA 7s on eBay go for between $25 and $75. There is some value there, just very little demand.

A PSA 8 very recently sold for $42 + $30 shipping. This card is probably worth about $40, but it’s nothing to write home about. For me, it was a memorable card from the anime.

After spending an inordinate amount of time sorting through my cards and evaluating them and spending 8 months waiting to receive them graded, the result was disappointing. I never would have sent these cards in if not for my more-valuable Pokemon collection. But I figured, hey, why not. I had a lot of fun with this game back in the day and it was worth preserving some memories. All in, the value of these 9 cards is now probably around $700. I’ll never sell them. If I do ever want to quickly sell them for what they’re “worth,” I’ll have to rely on the heart of the cards.

I Got My Yu-Gi-Oh! Cards Graded! 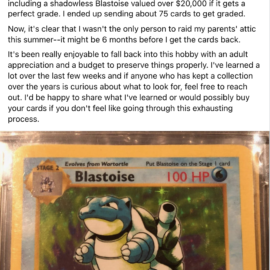 I Sent My Childhood Pokemon Collection to PSA 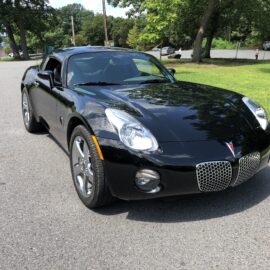 Is the 1-of-1266 Pontiac Solstice Coupe Actually Collectible?