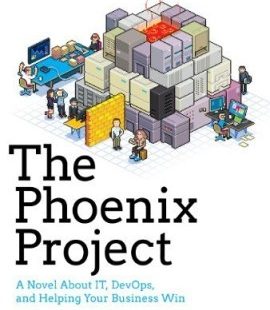 This is the most cliché book I have ever read. The Phoenix Project uses a contrived narrative to deliver IT best practices like a mother would use applesauce to hide peas while spoon-feeding a toddler. The state of technology/management books might have been different five years ago, but I found the over-the-top nature insulting to the intelligence of the intended demographic. Yes, storylines help reinforce points, but the best books I encounter nowadays contain real examples sans the dramatics and three hundred pages of fluff.

All of the characters are one-dimensional and predictable. Constants. Like the NPC characters you encounter in old RPG games, you know how the dialogue will go every single time. Eventually, you’re able to memorize a combination of down-arrows and X-buttons and you can skip the dialogue. You have Brent, the 10X programmer. There’s John, the manic firewall expert who basically drinks himself to death and is reincarnated as a superhero. Sarah is ambitious and it’s never clear what she does aside from asking the IT team to do work for her. You have Nancy, the main character’s wife, who understands but reminds him that his job sucks should he ever forget. And then there’s Erik.

Erik is the mysterious sensei type who guides Bill, the main character, to greener pastures and happy endings. There are a lot of riddles and descriptions of his clothing involved. By the end of the book, it turns out that Erik and Bill have a lot in common. Earlier, there is some type of seance where a few of the main characters dim the lights, sit around a table, and each reveals their “story.” Bill reveals that his father was a bad father–implying abandonment (yes, the book goes there). As I thought about it more while reflecting on why I didn’t enjoy this read, it seemed totally plausible that one of the authors, in an early draft of this book, planned to reveal Erik as Bill’s father. I’m not sure this would have taken the title for the most cringe-worthy revelation.

The plot goes from bad to worse to bad. Part one lures you in, while part two is a droning mundanity. In part 3, the authors use chapter 30 to remind you that they’re well-read, and later take two pages to explain how the IT Team made a miracle happen and subsequently saved the company.

If you’re an engineer, don’t read this. If you’re on the non-technical manager spectrum, there’s something for you here. You have to parse through a lot of garbage–and I think you’re better off just digging into more technically-oriented books–but there’s something for you here. You know how every manager has his the book? Please don’t make this your the book. You’re just a hypothetical to me right now and I’m confident that, regardless of your background, your precious time will be better spent reading something else. Truly, The Phoenix Project the book fails as embarrassingly as its namesake at Parts Unlimited.