Back in 2007, Runescape was one of the most popular games on the internet. Today, an “old school” version of the game, released in 2013, that preserves beloved late-2007 mechanics regularly has over 100,000 concurrent players. This warms my heart.

Though I don’t play anymore, the game is so popular that it’s hard to ignore. I follow some of the most entertaining content creators and I am regularly amazed by just how advanced the gameplay strategies have become. How academically and precisely people approach the game while still having fun. I guess this type of evolution can be expected with anything after ten years of trial and error.

I often find myself thinking back to playing the game during its prime and the what-ifs. How I could have leveled-up faster, how I could have been more competitive at my combat level. How, through programming a combat simulator, I could have earned over $100 an hour by comprehensively understanding, and methodically exploiting, the odds of an obscure player-versus-player combat scenario.

The economics of the game have always fascinated me, too. While many aspects of the in-game economy have been explored by those with larger audiences than me, there is one hidden gem that hasn’t received the attention it deserves. That’s because it was effectively deprecated by an update on November 26th, 2007 and never reached its former glory for the brief amount of time it existed in the rebooted game.

Runescape, in its golden times (2004 – 2008, 2015 – present) has featured free, unrestricted trade between players. This is common in most MMORPGs. Even the classic Diablo 2 featured trading. However, as was standard in the “next-gen” games like Diablo 3, on November 26th, 2007, Jagex introduced The Grand Exchange. Rather than trading occurring between two players in the same location (and a few specialized NPC-manned shops), this was a centralized exchange that facilitated both price discovery and trading itself. It made the game a lot easier (and, for this reason, wasn’t re-introduced to the 2013 reboot of the game until February 26th, 2015). But I’m not writing about the Grand Exchange. This article series will be about free trade in Runescape before November 26th, 2007 (and, less notably, between 2013 – 2015 in the reboot), how this system worked, and how the system may have responded to modern trading strategies.

First, something for the layman. In this game, you control an avatar. You have an inventory with 28 spaces and a bank with something-hundred slots (depending on what year it is). There are just about 3300 items in the game that can be traded (~2300 in the “prime” 2007), and at least that many that can’t be. Unlike many other MMOs, there are few special enchantments for end-game items and there is no way to differentiate two items with the same name. So, essentially, every tradeable item is a quasi-commodity. There are no special imbues, stat ranges, or +1 bonuses that can result in single items having hundreds of different permutations. A “dragon scimitar” is interchangeable with any other dragon scimitar.

When it comes to trading, one player right-clicks the other one, selects “trade with,” and, if the other player wants to trade, he’ll accept the request. In the trade window, players can exchange anything in their inventories. But, as in the real world, the most common trade will be one player’s gold pieces (the in-game currency) for a single one of another player’s items.

What items are actually traded? That’s difficult to summarize, but, broadly, there are two categories.  There are expendable items like wooden logs you can ignite or fletch, runes used to cast spells, and food that you can cook and eat. And then there are items you can equip, like armor, robes, capes, swords, and crossbows. Inventory space usually isn’t much of a problem, because all items can be “noted” at banks in Runescape, so that even if you have 150 steel platebodies, they all fit into one inventory slot.

Like in most games, weaker items are relatively easy to procure or buy from in-game shops with replenishing supplies. In the early days of Runescape, there wasn’t as much of an obsession with playing with maximum efficiency or much of a precedent set by earlier games. Plenty of early players got by without spending much time trading for new gear or knowing the true value of their items. However, after some time–nobody knows exactly when though this guy provides a succinct history–people who wanted to buy or sell things converged in Falador Park in World 2. In Runescape, worlds are servers able to support 2000 players concurrently. When you wanted to trade something, you would log in to world 2 and head to Falador. Before long, though, the player-created marketplace had grown to span the entire city between the east and west banks. 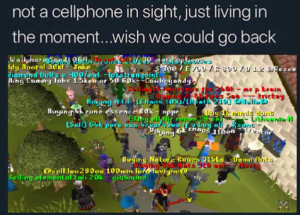 Yes, imagine hundreds of people all using colored and animated typefaces to broadcast their wares.

When we talk about this being a marketplace or an exchange, what we’re really talking about is an open outcry trading pit. With no rules or regulations. Sure, “scamming” was against the rules of the game, but to get busted for it you’d need to get reported (which would forward an activity snapshot for a moderator to review). For a span of time, it actually wasn’t possible to report someone who wasn’t logged in, so people would just log out immediately after cheating someone out of money. Because of this and the fact that certain scams in a trading environment like this would be hard to prove, it really was the wild west.

Trading converged in different parts of town for different classifications of items. The map I was able to dig up isn’t exactly how I remember things, but it’s worth mentioning that the four clusters on the far west of the map contain items that had been introduced in updates during 2007. I don’t remember them being there because my account got banned in February 2007 and there were a few months in 2007 where I was crying rather than playing the game. 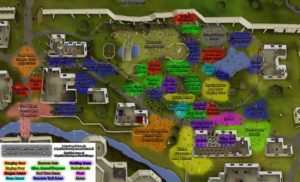 World 2 Falador was probably one of the most overstimulating environments to ever exist in a videogame. Nonetheless, this was a magical place. You could find whatever you wanted there. Some people came just to buy one item. Some attempted to “merchant” (buy low and sell high). Some came only with the intention of scamming. Some people logged in just to hang out. As I’ve thought back, I realized that the richest players in the game, who were known as “merchants” who “merchanted,” were actually market makers. I’ve put together some of the ways Runescape merchants in 2007 were able to make money, with parallels to modern-day financial markets.

You may be wondering if all meaningful trade occurred in W2 Fally, as it is abbreviated. Remember, players could trade wherever they wanted. Naturally, a few other areas sprung up. World 18 (the player-versus-player world) Edgeville bank, where many player killers would visit before or after venturing into the wilderness, was a popular place for supplies and newly-obtained loot to be traded. Generally, pockets of profit-seekers could be found in areas near banks closer to popular minigames and sources of materials.

Runescape had strictly-regulated forums in which users could post what they were selling or buying. Also, there were unregulated forums on fansites such as Tip.it and RuneHQ.

Whether you’re as enthusiastic about Runescape as I am or you simply find the topic of trading in videogames to be an interesting topic, feel free to continue reading in this next post.

Trading Strategies in Runescape in 2007 Part 1 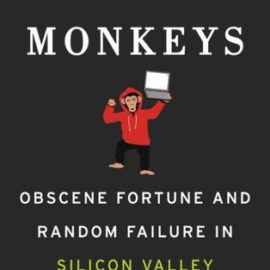