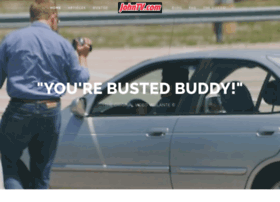 This is probably the most classic, raunchy, and divisive series to ever exist on YouTube. The channel JohnTV was removed by Youtube in August 2018, and, despite garnering over one-hundred million views, it’s basically been scrubbed from the internet and our collective consciousness.

South Robinson Ave is a desolate roadway near Oklahoma City, Oklahoma. Apparently, it has been a center for drug and prostitution activity for decades. Brian Bates, who lived nearby in the late nineties, was repulsed by the behavior of the “street-walkers” and their flagrant sexual activity–often in plain view from major roads–and decided to do something about it.

So the story goes, Bates tried testifying against several johns, or, men who solicit prostitutes. His testimony didn’t seem to move the needle. An attorney suggested that he would need to film the sex acts in order to have a case. So he started staking out the areas where prostitution was rampant and doing exactly that. JohnTV was born.

Unfortunately, the JohnTV website is now password protected and was purposefully excluded from Wayback Machine Archives. His YouTube account was banned, and his Vimeo account no longer exists. There is a very, very limited collection of videos that have been re-uploaded are archived. Here’s one that illustrates just how incredible this channel was–but most of the rest of what I’m going to say is from my own memory and other scant sources.

To summarize in case you don’t want to watch the video, Brian Bates would drive around dangerous areas. He would see a hooker get picked up by a john. He would tail the car until it turned into a secluded but “known” public location. He would keep on driving and would return several minutes later once things were heating up. He’d park his car. Then he would run–large camera in hand–to the almost-always-unlocked vehicle to get video proof of license plate, participants’ faces, and the “lewd act” itself.

The john, almost always with his pants down, almost always an overweight middle-aged man, would sheepishly apologize. The prostitute would sometimes chide Bates (awful last name for this type of work), as he eventually became really well known. What made these videos even more hilarious is that Bates would almost always then attempt to converse with the occupants. He would point out a man’s wedding ring and would often utter his trademarked follow-up “Can you not be bringin’ hookers back here?” before reminding them that the video would be sent to the police. He’d send videos to the police and, from what I remember reading, a non-trivial number of the johns did face criminal charges.

His early videos had shockingly-great production value for early YouTube and he continually invested in better recording equipment and editing. He gained exposure very late in the game through one of his few drone videos. How did people find his videos pre-recommendation algorithm? Honestly, teenage curiosity. For myself and a few others I asked, we were like 13 years old and typed in “hooker” to YouTube search. But it’s also likely that the videos ranked highly for more general terms like “sex” since these were the only videos where you could actually witness coital acts, albeit with quite a bit of obfuscation.

And, yeah, even with the camera blurs, this was really raunchy stuff. In some of the videos that I remember watching, Bates would stand outside of the car for about 15 seconds so as to capture the sex act beyond a reasonable doubt. These were pretty raw videos that didn’t leave a whole lot to the imagination. In fact, it’s incredible that any of them lasted past 2015 on YouTube. For those of you who don’t know, YouTube began to more strictly police semi-offensive content as advertiser spending ramped up.

Here’s where the plot thickens and Brian Bates gets some flak. He was an internet media pioneer. A guy who transitioned from a personal site to YouTube popularity as soon as he saw the opportunity. He was an early YouTube partner and claimed that he was making something like $80,000 from his online video empire back in 2008. This is deserving of praise–he was quite possibly the highest-paid YouTube creator in the early years if these figures are to be believed.

The stated mission was to clean up the streets and indirectly advocate for legal prostitution where women would not be exploited as much. On his website, which I don’t think I ever actually viewed, he had more than 50 interviews with street prostitutes where he tried to humanize them and tell their stories. Originally, he was anonymizing the faces of women who he captured on film. It turned out that a large portion of them were runaways, trafficked, wanted for more serious crimes, or other things. So he started showing the faces and, over the course of time, became friendly with some of the prostitutes. Seeing him open a car door and call a prostitute by name was jarring.

Way back in 2005, Bates was arrested and charged for “pandering” for apparently paying prostitutes “for their time” which investigators charged meant asking them to take clients to places where he could more easily film them. He still got charged with misdemeanors which absolutely casts a shadow over some of his work.

Some of the few posts I was able to find concerning Bates actually were from sex worker communities. As you can imagine, sex workers didn’t like this guy. Ironically, I think that he purpose, as stated, if realized, would have totally aligned with what most sex workers want. That is, safer, less stigmatized working conditions. The videos, as they existed for 20 years, amplified the stigma. Furthermore, I saw it mentioned and I remember this as well–Bates had a weird way of highlighting transgender prostitutes. In the early 2000s, this seemed normal because nobody (I) knew anything about transgenderism, but in retrospect, you could classify his comments as transphobic.

There’s an ever-present question of: was this some weird perversion? We saw the edited versions. But, if the few I dug up are to be believed, there were over 400 “episodes” of buddies getting busted. Did Brian Bates become desensitized to seeing fat middle-aged men naked in their Toyota Tacomas? Or–someone has to ask this–has the taboo, raw, nature of the videos been a source of pleasure for him?

Then there’s the legal aspect. Apparently, it was all legal because Bates only filmed on “public” property. But Bates had to be exposed to civil liability for the fact that he was technically recording and distributing pornography without consent. Not to say that most of the buddies looked like they were well off, but I’m pretty sure that any white-collar professional would consider this. Bates had the videos monetized. I think there’s a case there especially since it would be hard to prove that money had been exchanged and that the people being filmed weren’t simply having sex in public.

If a lot of the women were victims of trafficking, you also have to wonder if any were underage. It’s hard for me to ever imagine doing this, but if I was in Bates’ position, that part of it would really bother me. If he ever messed this up, that would probably be a crime and something that would cast a shadow over his work.

By early YouTube standards, these videos used to rack up crazy amounts of views. These home-grown, extreme Cops videos remain imprinted in my mind as a brilliant yet controversial early utilization of the platform. There were so many videos and so many legitimate charges that resulted from the videos that this was the real deal, critics be damned. Brian Bates risked his life every time he followed a john’s car and opened the car’s door into the unknown. Though we will always cast doubt onto how noble his purpose was, Brian Bates delivered an early YouTube gem. Thank you, Brian.

Where is Brian Bates now?

From what I’ve gathered, Bates became a licensed Private Investigator during his active work with JohnTV and, based on a post on Reddit, he is planning to attend law school this fall. Bates, by my estimation, is now fifty years old, so I really respect him continuing to hustle. His current project is a podcast where he dissects an odd case against an Oklahoma City police officer. Unfortunately, the stance he takes is very much against the popular sentiment of the times we live in, so I don’t see a point in linking to it or discussing it further.