Views: 241k on YouTube. Series over one million known.

Disclaimer: This is an extremely racy, inappropriate, video series. I do not condone this behavior or any of the words used. My aim is to capture this moment in time and my reactions fifteen years later.

I’ve said this in previous entries in the series. In 2006, Myspace was the hot new thing. YouTube was untested waters. Some Myspace creators came over to YouTube, and Drive By Insults #4 is the oldest surviving example of a type of tear-up-the-neighborhood comedy. There are ten videos that still exist on the channel, but they aren’t exactly sequential. The years separating the first upload and last are most likely due to the creators not seeing a reason to port everything over to YouTube.

Even fifteen years ago, this was a brazen thing to do. Even if you drive to the suburb next to yours in New Jersey, there’s a pretty good chance that someone calls the cops on you and you eventually get picked up, bulky video camera in hand.

As an original idea, this is genius. Yelling insults out a car window is significant on many fronts. First, it touches on the “car culture” unique to America. The fact that the pranksters appear to be driving around a somewhat-nice suburban area provides a hilarious setting. From that perspective, it’s hard to say that these videos wouldn’t have been influenced by Jackass, CKY, Viva La Bam–that entire subgenre that transpired in West Chester, PA was highly influential at this time. Judging by the voices in the videos, I would doubt that every person in the car had a driver’s license. In other words, these were young, impressionable kids doing something reckless.

The theme of causing a disturbance in an otherwise tranquil town has been done before. What’s unique to this is that the “drive-by” event only gives a target seconds to respond. The pranksters actually seem to take the responses very seriously, when someone does retort sharply it appears to reflect poorly on the insulter. Not only could this type of thing be dangerous due to shocking pedestrians near roadways, but this is obvious verbal assault. I can’t say I’m familiar with the legality of this.

The collection of insulting words and phrases is hilarious. It’s what stands the test of time and what makes this video seriously worth the re-watch. The insults, on the fly, are tailored to each specific scenario. Aside from the fact that you can’t make this a weekend activity without getting the cops called on you, I really don’t appreciate when they yelled curses at children. That, among some other things, reflects really poorly on the series.

As far as how the videos evolved, they did, inevitably, start throwing things. This becomes a more serious crime. But in episode 2.5 they did tell a man that he’d “been a bad boy” before throwing a large plastic candy cane which hooked onto and spun around his arm. Always loved that one.

Little is known about the video creators. The channel has almost 9000 subscribers. The Myspace page is not able to be viewed.

I’ve picked #4 because it is the oldest and has some of the insults. This said, there are certain insults that I won’t cover, because I just think they were pretty stupid.

Starts off with a meteor shower before showing the subtitle: Armageddon in [New] Jersey, then highlighting the Myspace URL. Twenty-five seconds in, we’re right to the action. The super-fast cut makes it so that you cannot look away.

To set the scene, a cameraman is perched behind the insulter, sitting shotgun. Sometimes, the camera is held out of the window, other times the shot is captured from inside. The vehicle is always moving and, miraculously, always seems to have a clean getaway.

“You’re a fuckin’ piece of shit fatty” is the first insult, as an overweight man stands in what appears to be a used car lot taking a picture of a car. Quick cut–

“Aye, nice dog [gay slur]!” is then yelled at a father, son, and their small beagle.

Outside an auto body shop, they spin a jovial looking man around with the “Hey, nice car dumbass!”

A child and his mother cutting across a yard are hit with “Get the fuck off the grass!” Though inappropriate, this one always struck me as somewhat witty and creative. If you didn’t know that there was a car full of teenagers roving around yelling at pretty much every person, this would have me reflecting on whether I should have been on the grass.

Next is a simple scream directed at some adolescents, one of whom yells back.

Then, a child is told to get the f off his bike. Never liked this one. Same with the next one, where a group of people is referred to as a bunch of whores. In the next one, a woman who is washing her car is insulted, which sounds kind of funny situationally, but it’s kind of creepy in 2020. Along with most of them targeting women.

There’s a simple “Fuck you assholes” followed by a “Keep sweeping that shit [gay slur]” targeted at a guy sweeping the street.

I’ll skip the next few.

Some guys doing a landscaping project are told to “get out of the street, asshole.” The comedy in this one is that the dudes are just doing their job.

A group of skaters are met with a barrage of insults which ends with “go back to the roller-disco!” I always liked this one.

“Nice shirt you fucking Geodude” is a classic. The Pokemon reference just works. After a brief transition, we get “there’s no such thing as Santa Claus ha-ha!” said to a small girl. Brutal!

A guy picking up after his dog is told to… well… you can probably guess. Then, and I find this interesting, a girl dressed in classic emo attire is targeted and told … do I need to keep writing down the insults?

An overweight man with a Liberace haircut watering his grass while wearing a speedo is told to put on some clothes. Hey, someone needed to say it.

“Go back to Seaworld, Shamu” :cryinglaughingemoji:

I’ll cut it there. There are some unique scenes here, and it’s clear that this wasn’t a single take. This was comprised of days and days of filming. It takes the perfect combination of situation, insult, and reaction, to make a good drive-by insult. While these guys went a little too far, nobody came closer to perfecting the art.

I remember hearing that some of the videos were removed from YouTube because the content was so inappropriate, which I believe. I also don’t blame the creators for letting the channel die, as I’m sure they do feel some guilt and it’s inevitable that they were eventually paid a visit by law enforcement. Quite a few assumptions on my part, but this, rather than the gang going off to college, is likely what ended the videos. The channel remains, but nothing has been posted to it in over a decade.

However, once in a while, the creators did return to comment! This is all we know: 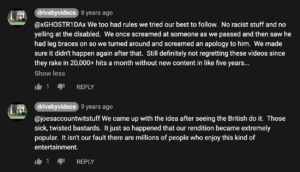 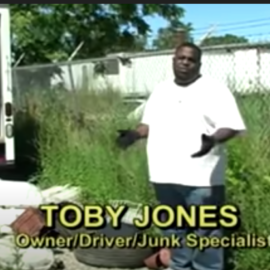 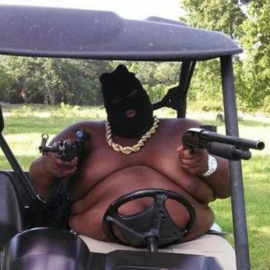