Says someone who writes for the Wall Street Journal, which is a publication deserving of high praise, though my trial membership just converted to a full-priced one.

The article in question is titled When a Passion for Videogames Helps Land That Job, and, contrary to what you might expect, it doesn’t discuss landing jobs at companies that publish games. It makes the case that individuals whose backgrounds include “making or playing” videogames are becoming more desirable. This sounds great, maybe not to the average Wall Street Journal reader, but probably does appeal to the average Tim O’Hearn’s Blog reader. Do I think there’s any truth to it?

Well, yes, but in order to make the article float, the author clumsily bunched together people who “make” videogames and people who “play” videogames. We can assume that every person who makes videogames also plays videogames the same way we can assume that every person who makes cider handles apples. But the former group is infinitesimal compared to the group that plays games. And the gap between the general job qualifications of each group is so large that I don’t think they’re worth comparing.

The article says that some employers have found that videogame players can more easily adapt to situations and learn complex systems, but I think this is a total joke.

Really, there is no “average” gamer anymore. The “stigma” has been eroded. Not to imply that girls thought it was cool when I talked about Pokémon GO during the summer of 2016, but gaming isn’t as closeted or as antisocial of a hobby as it once was. People often forget to attribute this shift to the rise of casual gaming that stripped away the nerdy themes and replaced hack-n-slash sequences with gameplay that rewires the brain’s reward circuitry.

The average gamer today is really the average human with a cell phone. There’s nothing to comment on there aside from what you already know, which is that this group is too large to extract insights from. What is more intriguing is the gamers who list gaming on their resumés, which is the scope that the article is really going for.

But it’s never clear whether this is a single entry like “gaming” or “World of Warcraft” in a crowded hobbies section, or if we’re talking about an entire section of experience. Another Wall Street Journal article from almost five years ago makes the point more convincingly: people who have leadership experience inside the virtual world may try to leverage that in real life.

But the only gamers who really have an edge are the ones that make games. That’s only if the person reviewing your resumé knows what goes into it! Making a game today is much easier than it was 5 years ago (it wasn’t even referenced in the older article), but even now it requires solid expertise. The reason that those who make games or even mod games may be so sought-after is that to be successful in what they do, they’re forced to push the envelope in many different areas. Often, these are things you won’t learn in school (which, in turn, is why videogame schools are popping up). Good artists might need to learn animation. Great programmers might need to learn how to create soundscapes. Ambitious creators will need to learn everything–from designing sprites to building (or modifying) a game engine.

If you have made a game, that’s going to go a long way in securing you an entry-level job in a variety of industries. If you’re the guy whose first major creation was Stardew Valley, well, then, you don’t have to work for the rest of your life and you get a feature in GQ. The problem is that making games, especially without a team, is such a feat, that we don’t need WSJ articles proclaiming how useful the experience is.

In fact, during my freshman year of college, I entered a game design contest with a few of my friends. We used a platform that was beginner-friendly. There was very little coding we had to do–my main interest was creating sound effects and gameplay music using my microKORG. I also tried to implement terminal velocity–though I didn’t know the word for it yet–in order to make the game as addicting as possible. I thought we had a good game, but, on the day of the contest finale, we couldn’t get it to play on any of the test phones. It was like we never even entered. I still listed it on my resumé for a brief time.

In a wild coincidence, one of my best friends (who had no knowledge of my original creation) designed an eerily-similar game with my identical concept of terminal velocity, got it to work, and ended up winning the same contest three years later!

So, then, why do gamers need to be praised? Why aren’t they the same as people who list watching TV or reading books on their resumés? Gamers need the defense because, while certain societal stigmas have faded, others have strengthened. This comment from the older WSJ article contains most of my thoughts: 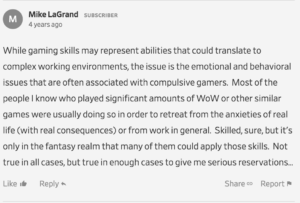 The problem is that, when it comes down to it, a lot of gamers play to escape from life. As a result, while not stereotypically socially inept, they are rarely ideal employees.

Any serious gamer must spend a significant amount of time well… gaming. Even if you play a game for 3-4 hours a night, on average, that leaves no time for any other meaningful activities aside from work or school. In most cases, and this is the key point, you will skimp on other areas of your life simply because gaming provides the most favorable ratio of discomfort to dopamine. I just made that ratio up, but it’s true (just like things I cite in my other articles without sources). Sure, TV is easier, but even a mediocre game is going to be more stimulating–it’s going to get your brain producing way more dopamine.

Like a drug, it becomes hard to resist choosing games over things that are difficult. What I’m saying is that serious gamers (the people who won’t think twice about listing playing them on a resumé), just like people who are addicted to scrolling through Instagram, are going to exhibit weird-ass symptoms that science has not caught up to yet. As a whole, this will not benefit your business in any way.

Those who develop games for fun are a rare breed that deserves special consideration, but those who are a little too eager to talk about the games they play are probably best left to collecting gold coins.

Playing Videogames is a Resume-Booster? 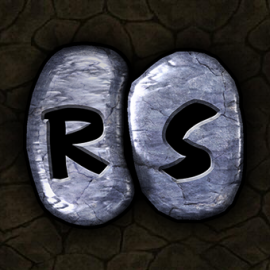 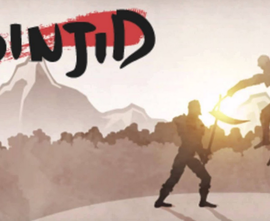 Revisiting the Sinjid Trilogy as Adobe Flash is Discontinued