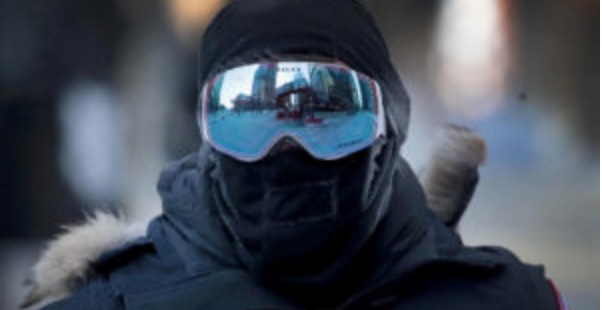 Chicago is a city where the wind is never at your back. Over time, a resident will learn to cope with the weather, general hardship, rising taxes and fees, and bad drivers. In a lot of ways, Illinois is a perfect representation of the United States of America. Chicago is its most precocious yet temperamental child.

Chicagoans are tough, hard-nosed. This is what people tell us, which is largely preferable to being weak and whiny. During the week of January 30th, 2019, our resolve was tested. The polar vortex was swooping in. Not a single snowflake would fall but temperatures would plummet considerably. Negative twenty-five is what the weatherman said, approaching negative forty-five with the wind chill, which always struck me as a whimsical measurement.

Businesses closed. The commuter train stopped running. Flights were canceled. Birds stopped flapping their wings. Even some crosswalks were frozen perpetually on the Don’t Walk signal.

The recommendation was to stay indoors. I had no inclination to spend a long period of time outdoors but I still had to commute. My employer had not closed the office because financial markets are agnostic on the topic of local weather. One mile separated my loft apartment from the venerable Sears Tower.

I took to Snapchat and let my followers know what I planned to do via a monologue in which I’m not sure I blinked. I stated that I refused to be marginalized by the meteorologists of our time. And this stands true today. Aren’t we supposed to be curious about what extreme cold feels like? It’s fairly hard to recreate artificially–in fact, the only place I’ve seen it recreated is in the coat testing room in the Canada Goose store in Banff, Alberta. So why was everyone so scared to walk a short distance to work?

As far as mass transit goes, I kind of get it. In the suburbs, commuters probably have to wait outside on some cute platform for their trains. On the way to the city, if the train broke down and everyone had to exit the train and idle for an unknown amount of time, lives would be in danger. Plus, the Metra tracks are a coyote sanctuary. I’m not doubting that frigid temperatures are harmful, I just think that we have become unnecessary protectionist when it’s rarely a life or death situation.

I’ve spent a lot of time outdoors in the winter months. For most of my high school years, I ran or skied every day with no face protection. This was in Pennsylvania, never in a polar vortex, and I emerged from these years with minimal skin damage. If I knew anything from these “invincibility” years, it’s that people greatly exaggerate how harmful controlled periods of cold exposure are.

I still wasn’t taking any chances. I put on a balaclava, my Oakley Flight Deck goggles, a pair of Hestra gloves, and my trusty Canada Goose. It was time to begin my trek.

Outside, as soon as I turned onto Jackson Boulevard, I realized that I was the only person on the street. There were no cars and no pedestrians to be found. The wind was blowing but it was nothing I hadn’t seen before. What struck me after walking two blocks was how cold any slivers of exposed skin were. This was, indeed, a different chill.

I pulled down my balaclava to speak for a short Snapchat. As soon as I took one glove off, I realized what made these conditions so dangerous. I didn’t feel an immediate numbing sensation. I felt pain. It was so cold that, when removing protection, my skin constricted in a way that was physically irritating. I quickly finished my Snapchat.

As I crossed Halsted, I made my way to the worst part of every morning commute, the Kennedy Expressway overpass. I usually don’t look at the traffic underneath me, as this requires facing an insane headwind. The traffic was light but not apocalyptically light. Walking over the expressway that morning was harrowing. There was a small patch of exposed skin where my goggles met my balaclava and I kept touching it so as to prevent it from dying and chipping off of my face.

I’m a fast walker. Once the bridge was behind me, I realized that my legs didn’t feel right. From years of exposure, my legs don’t get cold, conventionally speaking. I looked down. My pants were Lululemon Commission pants. Mostly polyester. They offered no protection from the cold air. Neither did my Nike Free Runs. My lower body was under assault and it hurt. I started a slight jog.

Three blocks later, I passed by my old employer–TransMarket Group. I respected them on this day because surely they were going to work, too. I thought about taking a Snapchat in front of the company’s nameplate but I was already in fight-or-flight mode. My jog became a run.

I took another Snap as I ran past Union Station. There were some cars on the road but no pedestrians on the sidewalk. As my breathing became more labored, I noticed that the air I was pulling in through my balaclava was still frigid. It hurt my throat.

I picked up the pace past Canal St and ran over the Chicago River. It was beautiful, the river and not having to dodge and train people. I accelerated crossing Wacker, in the shadow of the Sears Tower. As I reached the construction zone, I saw a man with a large camera pointed at me. This was Scott Olson from Getty Images.

Entering the Sears Tower, I was one of the only people in the lobby aside from the doormen. In the elevator, I launched into one last monologue, admitting that it was the “coldest cold I ever felt” and concluding with “Don’t ever let other people tell you what to do.” I made it to my floor and it was just another day. Desks were almost fully staffed but some employees from outlying areas had stayed home. I took off my goggles and balaclava. Nobody offered comment. It was just another day.

At lunchtime, when I pulled up the Wall Street Journal, a picture of me was featured prominently. You can tell it’s windy, you don’t know that I’m running; you can infer it’s cold, you still don’t know what it feels like.