Disclaimer: This is an extremely offensive and off-color video. It is satire. This video and article are not affiliated with Papa John’s.

I have been a prolific YouTube lurker for the past 14 years. I also possess a sharp memory. I’ve decided to write about classic videos that haven’t been given the attention they deserve. Ideally, the videos are still on YouTube, but in some cases, they’re long gone.

Even though my video editing abilities ended with Windows Movie Maker, I should probably be using video to cover videos. Today, like many other days, I’d prefer to write.

In the early days of YouTube, there were some epic prank call videos. This material was easy to create because it usually did not require much of a visual. You could just set a stock background or create a simple animation to keep the user entertained.

The most iconic prank call video on the early internet was You Kicked My Dog. This was a perennial FunnyJunk.com Top 10 video that pre-dated YouTube. Another notable one was the Ken Sander Public Access Prank Calls. Where You Kicked My Dog was simply racist and juvenile, Ken Sander’s “bombardment” involved diverse comedic styles. Further, it had been captured on VHS tape in 1990–the fact that someone had recorded it and preserved it until internet tube sites started popping up ten years later is something that is overlooked. Aside from sporting and public interest events, very little of the VHS era has been uploaded to YouTube.

One of the more prolific early prank call aggregators was known as BuddyGz. I can only assume that his YouTube channel was taken down years ago, but there are still relics of his presence online. You can find mentions of him on ancient forums and even find some call compilations re-uploaded as the “BuddyGz collection.” I believe that his videos started popping up in early 2009.

There is one claim online that this particular practical joker used to work in collaboration with Howard Stern. If true, this would be the voice of Captain Janks. However, there are so many imitators that I would not be able to attribute every call to him. Anyway, BuddyGz, whether he was an aggregator or the prank caller himself, had an absolutely hilarious collection of C-SPAN prank calls. I have considered them the gold standard.

In January 2009, Jack Stratiff uploaded a collection over more than twenty prank call videos. Apparently, they were recorded in the year 1999. What makes these calls unique is that he wasn’t making the calls. Instead, he was receiving legitimate calls, having a phone number that was one digit off from the number of his local Papa John’s, somewhere in the vicinity of Newark, Delaware. Another claim is that this Papa John’s actually printed Jack’s phone number on a flyer.

When Jack received a call that was intended to be a Papa Johns Pizza order, he would capture (using what 20th-century technology–we don’t want to know) an off-the-cuff prank call recording. Mr. Stratiff has an incredible voice and he can think on his feet.

The main premise of many of the videos is that he would tell the caller that there was a “delivery block” on their phone number before insulting them in a brash way. What makes Stratiff’s collection genius is that he made the effort to do the little things. For example, he had an 8-bit Joy to the World “on hold” tone play whenever someone asked him to speak to the manager. While it played, he continued recording the caller’s audio, setting the atmosphere perfectly.

This is a legendary set of prank calls. In total, Jack has amassed just 6.1k subscribers and slightly over one million video views.

With a little research, I was able to determine–definitively–who is behind the pen name Jack Stratiff. Due to the nature of these calls considering today’s climate, I think that it would be inappropriate to reveal his name. Jack, if you’re reading this, thank you for the laughs!

Jack Stratiff’s defining prank call was the Fraternity Special. Many of the others are incredibly high quality, but this one gets the nod mainly due to the subtleties of an otherwise obnoxious exchange. The fact that he was able to get a group of intoxicated fraternity guys on the other end of the phone is just classic.

Culturally, Jack embodies that late 2000s agitator perfectly, down to the intonation and choice of insults. Further, despite the typical Papa John’s manager not having experience with Greek life, Jack refers to other fraternities on the campus by their nicknames, and also responds to the “did we not give you a bid?” question with a powerful retort “I would never have rushed–.” The obliteration of the caller’s ego as Jack continues to insult his fraternity’s stature is a notable segment in American pop culture. The caller’s tone helps us understand some classist elements, as pizza restaurant workers are usually uneducated while fraternity members are often the children of the upper crust. This is exemplified by the fraternity member’s flamboyant reaction to Jack claiming to make $8.50 an hour (which in 1999 was actually a good wage) and his asking if he attended college.

Here is my attempt at capturing the notable exchanges:

Jack: “Well, it’s the fraternity that you’re in actually, we don’t want to be associated with it. With a homosexual fraternity. *pause* A gay fraternity, such as Sigma Chi. We support fraternities such as ATO, Sig Ep, Sig Nu, some of the more reputable fraternities. Respectable–respectable–”

“You realize, you realize we’re five-star number-one on campus?”

Jack: “Five-star number-one losers, maybe. You guys have been bringing us, our business down for the last two years.”

Jack: “The reputation–that it brings.”

“What is the reputation of that again, sir?”

“What is the reputation again, homosexual?”

Jack: “Ah, that’s just a figure of speech sir, I don’t, listen, bringing down, it brings down our reputation. I got a restaurant to run–”

Jack: “Listen to me, you son of a bitch, I don’t have to put up with this, I have a business to run.”

“Are you slandering me, on the phone, as a manager of Papa John’s?”

“You gonna threaten me?”

Jack: “Oh, trust me, you could bring as many guys from that fraternity as you want to down here.”

“And what are you gonna have there?”

Jack: “I got the staff here that could take you guys out.”

*scared* “You got the staff, huh? *mumbles* homosexual, losers…”

Jack: “My delivery driver Ted could take on probably the whole fraternity.”

Jack: “That’s one of the biggest bunch of losers that I’ve ever seen put together!”

“Did we not give you a bid or something?”

Jack: “I never would of rushed a fraternity of that stature. Because it made me look bad.”

Jack: “What is that stature? Homo-sexual, uh, is it, it’s one of the less respectable fraternities. The sororities that you probably mix with are probably, uh, some of the, lower-class, trashy, sororities with the fat girls.”

Jack: “Let me tell you somethin’ dork, I ain’t got”

Jack: “Why don’t you get some balls, buddy and come on down here right now? Let me show you what’s going on down at Papa John’s.”

“What’s going on down at Papa Johns, minimum wage down there working four-hour shifts?”

Jack: “I make eight dollars and fifty cents an hour there, bub”

Jack: “You will never order a pizza from this establishment again. They will never be delivered and I will never deliver it to you.”

Jack: “We will never deliver food to a faggot fraternity. A fraternity full of homosexuals.”

“Are you in a fraternity? Did you go to college?”

“Are you in the KKK? Do you belong to the KKK?”

Jack: “No sir, no sir. My sister’s best friend is black.” 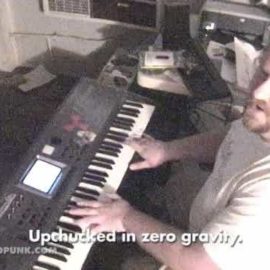