After singing high praises of the Ikon pass last year, I switched to the Epic Pass for the 2020/2021 ski season. Mainly, I was looking to explore more resorts that I hadn’t visited before. I figured that Epic resorts would have more consistent Covid protocols as well. Vail’s refund policy, if the season was a bust, seemed more straightforward.

In a modification of last year’s format, I’ll be providing more thorough resort reviews in addition to the rolling value-for-my-money statistic.

I Buy the Epic Pass

Well, we all start at the same stage, don’t we? I purchased the Epic pass for the season not quite knowing how things were going to work or if there would even be a season. I told a lot of people that the season would end prematurely in several western states due to paranoid state officials. This didn’t happen. It was a full season. I was wrong.

The timing of Christmas and New Year’s Day this year allowed for the rare mid-December ski vacation. I had the vacation days to burn and a large hotel gift card provided by my employer. I posted up in Sun Valley for a full week, skiing seven days consecutively.

Sun Valley is independently owned and is a Vail partner resort offering seven days of skiing to Epic pass holders. I skied for seven days where the average lift ticket would have cost about $99 per day. A pretty good deal in today’s world.

This resort is overlooked because it lacks the pure vertical, pure acreage, and sheer difficulty of resorts like Vail and Jackson Hole. Okay, I get it. Since this was the warm-up trip to start the season, I spent a large portion of my time lapping Seattle Ridge. Flush with “beginner” trails, yes, but there were few lift lines and it was a great testing ground for demoing new skis and working on my turns. I prefer quick rests and quick, explosive runs compared to slow, long ones.

Early December is precarious for snowfall. Sun Valley had decent coverage but many trails, even those with snowmaking, weren’t quite open. I had read that Sun Valley has one of the most advanced snowmaking systems in the country, but you can only fight against mother nature so much.

The day where we did get a nice snowfall, I found the bowl skiing from the top of Baldy to be quite fun. However, there wasn’t huge variety, the bowls end in awkward funnels, and I never felt fully oriented as the slopes sit at an awkward angle not quite pointing straight down.

I’ve said it before and I’ll say it again. Park City is among the most awkward and overrated mountains when the snow is bad. During the New Year’s period in 2020, the snow coverage was awful and only about 25% of the mountain was open. At a mountain as big as this one, this ultimately means that only a few trails off each of the, like, 20, chairlifts are open. Most intermediate/beginner areas, and most are intermediate/beginner areas were overcrowded with novice skiers.

As soon as McConkey’s opened, all the “expert” skiers began to crowd that lift, which had a line lasting 20 minutes most days. For the brief time that 9990 opened, there were a few excellent runs there, except none of my friends were skilled enough to make it down quickly, so a single run took 30+ minutes and that was that.

I will probably never try to do early season Park City again. However, at $179 per day, I still got my money’s worth here. By the second trip of the season and I was positive on my pass value!

I spent 3 (or 3.5?) days skiing at Vail in late January. Vail is very expensive. The snow in the western US was much better by this point in the season, though a lot of people had been saying that Vail was passed over by some of the larger storms.

We had a 10-inch dumping before our second day here. Those next two days were some of my best skiing ever. Add in how much easier it is to get here coming from Chicago and I’m a member of the Vail 4 life squad.

I ended the season at Crested Butte in February. I had an awful experience traveling to get here (lost almost a full day) so the trip was pretty much more trouble than it was worth. CB had surprisingly bad snow coverage which, if you’re still saying that by the time I arrived in February, it was a bad year!

Crested Butte had some wild terrain. I skied some of the most extreme runs of my life here, including Rambo. There are a lot of chutes, funnels, and pure steeps that are not common at other resorts. Unfortunately, almost all of this terrain is serviced by T-bar lifts.

So, Was it Worth it?

I say this in jest, of course. I got my “money’s worth.” Now, for each of those ski days, how much did I enjoy actually being on the mountain? Were the conditions pretty bad this year? Yes. Did Covid protocols make everything even worse, especially for a solo skier? Yes!

None of this is Vail Resorts’ fault. Friends on the Ikon pass experienced many of the same difficulties, especially when skiing in Colorado. I just happened to pick a bad batch of resorts that didn’t get much snow. With the Epic pass getting a 20% discount for 2021/2022, looks like I have no choice but to return. 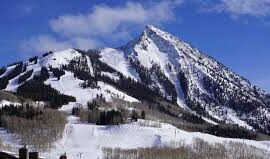 Ski Resorts Are Being Weird About Covid